In time series analysis there is often a need for smoothing functions that react quickly to changes in the signal. In the typical application, you may be processing an input signal in real time, and want to compute such things as the recent average value, or get an instantaneous slope for it. But real world signals are often noisy. A few noisy samples will make the current value of the signal, or its slope, vary widely.

The simplest smoothing function is a windowed moving average. As samples come in you take an average of the most recent N values. This will smooth out spikes, but introduces a delay – or latency. Your average will always be delayed by the width of your moving average.

The example above is relatively expensive to compute. For each sample you have to iterate over the entire size of the window. But there are cheaper ways – keep the sum of all the samples in the window in a buffer, and adjust the sum as new samples come in:

Another type of moving average is the “weighted moving average” that weights for each position in the sample window. Before averaging you multiply each sample by the weight of that window position. Technically this is called a “convolution”.

One typical weighting function applies a bell curve to the sample window. This gives a signal which is more tuned to the center of the window, and still somewhat tolerant of noisy samples. In financial analysis you often use a weighting function that values recent samples more, to give a moving average that more closely tracks recent samples. Older samples are given progressively less weight. This somewhat mitigates the effects of latency, while still giving reasonably good smoothing:

With a weighted average, you always have to iterate over the entire window size for every sample ( unless you can constrain the allowed weights to certain functions).

Another type of average is the exponential moving average, or EMA. This is often used where latency is critical, such as in real time financial analysis. In this average, the weights decrease exponentially. Each sample is valued some percent smaller than the next most recent sample. With this constraint you can compute the moving average very efficiently.

Where alpha is a constant that describes how the window weights decrease over time. For example if each sample was to be weighted at 80% of the value of the previous sample, you would set alpha = 0.2. The smaller alpha becomes the longer your moving average is. ( e.g. it becomes smoother, but less reactive to new samples ). 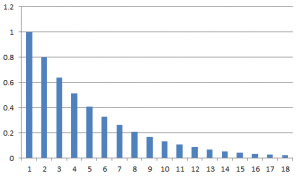 The weights for an EMA with alpha=0.20

As you can see, for each new sample you only need to average it with the value of the previous average. So computation is very very fast.

In theory all previous samples contribute to the current average, but their contribution becomes exponentially smaller over time.

This is a very powerful technique, and probably the best if you want to get a moving average that responds quickly to new samples, has good smoothing properties and is fast to compute.

The code is trivial:

The standard EMA is fine when the signal is sampled at regular time intervals. But what if your samples come at irregular intervals?

Imagine a continuous signal which is sampled at irregular intervals. This is the usual situation in financial analysis. In theory there is a continuous function for the value of any financial instrument, but you only can sample this signal whenever someone actually executes a trade. So your data stream consists of a value, plus the time at which it was observed.

One way to deal with this is to convert the irregular signal to a regular signal, by interpolating between observations, and resampling. But this loses data, and it re-introduces latency.

It is possible to compute an EMA for an irregular time series directly:

So how well does this work? To demonstrate I’ve generated a sine wave, then sampled it at irregular intervals, and introduced about 20% noise. That is the signal will vary randomly +- 20% from the original “true” sine signal.

How well does the irregular exponential moving average recover the signal? 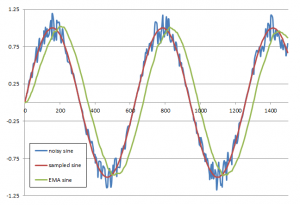 It is shifted about 15% to the right, because the EMA does introduce some latency. The smoother you want it, the more latency you will see. But from this you can for example compute an instantaneous slope for a noisy irregular signal.

What can you do with that? Hmm….

Previously I was CTO of Mimoco and worked on SEO at TripAdvisor focused on flights and vacation rentals.

For many years I was a game developer, helping make games for Harmonix, Apple, THQ, LucasArts, Nickelodeon, Ubisoft and many others. I've worked on speech recognizers at Kurzweil, and genome mapping at the MIT/WIBR Human Genome Center.

An anagram word game, written in HTML5, crafty.js and a custom server api.

An experiment in organizing the data for the Skyrim Alchemy skill

A news site about the 2010 election